The Next Big Thing In The Crypto Space: Experts Opinion

At the moment, the interest in cryptocurrency is growing rapidly among private equity investors. However, before putting your money into crypto trading, it is vital to understand the next big thing in the CryptoShere. Read to find out experts’ opinions on where your attention should be as a crypto investor. All ideas in this article were derived from the book, The Crypto Factor by Paul Democritou.

According to ICO inventor J.R Willette, one of the next big things in the cryptosphere is the need for the government to take crypto trading seriously and even legalize its use. “We need solutions. When the government finally starts taking decentralized currency seriously, it will probably be doing so in a state of panic. We need to be advising governments now about how they can survive the storm and protect their populace. We need to think of ways the government can pay for its most critical operations and what legislation makes sense to mitigate these new risks while preserving as much freedom as we can.”

Increase in Cryptocurrencies that solves problems 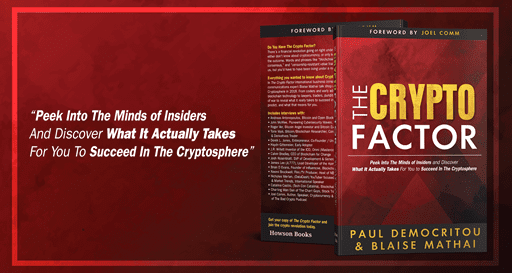 Blockchain specialist Tone Vays believes that for new investors, the focus should only be on Bitcoin. “It’s just Bitcoin. I don’t really care for any other coins. In my history of crypto, I’ve occasionally ended up utilizing another coin, but that’s no longer necessary. Bitcoin is now very liquid and very quick and very cheap, so no. I see all of these old coins becoming less and less relevant over time. They have huge technological risks, way more than Bitcoin. Ninety percent of them have enormous regulatory risks. They are all centralized. The US government can show up and shut down the project. It’s just too many risks to make any further analysis.” He said.

Focus on investor dreams and goals

Co-founder of “mom-friendly” Derek L Jones believes that the focus as an investor should be your dreams, goals and aspirations. “Follow your dreams, man. We’re given those dreams for a reason. They’re important, to not just you but to everyone around you. You have no idea whether or not the idea that you have is going to change the world, and it’s going to fix lives for millions of people. A lot of people don’t know if your idea changed the lives of a hundred people. You have done an amazing job. If the idea that you have changes the life of one person. That is your life. You have done an amazing job.”

More attention on money you can control

In addition, one of the next big thing in the cryptoshere is focus on the money you can control, said Noami Brockwell, “It’s a really exciting technology that is changing the lives of people all over the world. We hear a lot about how Americans are using it, perhaps people in Canada or Australia. When you start to hear stories from Venezuela, where this currency is literally changing people’s lives, it’s become a lifeline for them. That’s when things really start to get interesting. That’s when the message really starts to get powerful. I think that we’re so used to having a financial system that basically works, whether you like it or not, that we lose sight of the fact that when you have government-controlled monies, sometimes it has disastrous consequences for the people in that country.

One of the world’s foremost bitcoin and open blockchain experts  Andres Antornopous, believes that your location and needs will also matter when determining the Next Big Thing In The CryptoShere. “That very much depends on where you are and what your needs are. One of the big misunderstandings is the idea that these systems fulfill all needs for all people in every country equally or similarly. And that’s not true. If you live in Venezuela, Argentina, Turkey, if you live in a country with hyperinflation, your needs are very different from someone who lives in Silicon Valley. I think that’s going to guide the development of these systems. Different groups of people are going to find different reasons to evolve systems and will see in the different values.”

To learn more on the next big thing in the cryptoshere and where the attentions are all shifting to, order The Crypto Factor: Peek into the minds of insiders and discover what it actually takes for you to succeed in the cryptosphere.