All Your Cryptocurrency & NFT Questions Answered

I was recently interviewed by Lifo Magazine in Greece about cryptocurrency, and NFTs. The questions seemed to be what most people are asking so I decided to translate my answers in English, and have the most common cryptocurrency and NFT questions answered simply for you.

Tell me a few things about you. What should somebody know about you?

I’m an entrepreneur and author, vlogger and Cancer survivor. I wrote my first book, Success I.A.O., during my first battle with non-Hodgkin’s Lymphoma in 2016, to give me something to focus on, and so I don’t have to start from zero when I get better, or if I didn’t make it, I would leave something behind. Since then, I have written or co-authored five other books and am working on three more, including The Crypto Factor, Crypto marketing Playbook, and Crypto Marketing Essentials. Here in Greece, I’m the co-founder and co-owner of BitBullz.io, a playable NFT metaverse with Alex Papadopoulos of ArtnRoll.Games 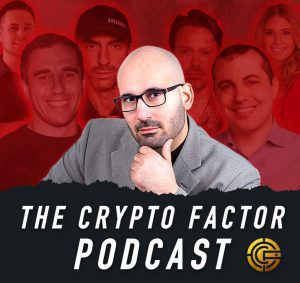 When did you start working with cryptocurrencies?

In 2017, after I got past cancer. The brother of the CEO of a telecommunications company I was mentoring showed me how to buy it. I had heard about it and wanted to buy some but didn’t know how. I fell in love with it. My next job was as CMO for a crypto project in Poland, and I have been working with companies in blockchain around the world ever since.

How many books have you written?

After Success I.A.O., which has been described as the best book I have written with the worst title I could possible think of, I co-authored The Closers Part 3 with living legend Ben Gay III, who had written the foreword to my first book. In 2018, I wrote a slim volume on sales for beginners called How to Sell a Pen-Really, and in 2019 Blaise Mathai and I released The Crypto Factor, a series of interviews about Crypto. The interviewees ranged from top players and pioneers in cryptos such as Roger Ver, Tone Vays, Andreas Antonopolous and the late Joel Comm, and more controversial figures like John McAfee and less well-known early adopters and enthusiasts. We wanted to get a broad spectrum of input to give people a snapshot of the industry’s mood in its early days. After that came the Crypto Marketing Playbook and Crypto Marketing Essentials.

What else are you involved in?

I’m co-founder and co-owner of BitBullz.io, an NFT gaming metaverse with Art n Roll, a Greek company. It’s the first NFT gaming company here in Greece, so it’s nice to be here to work with them. We recently collaborated with music artist Claydee to provide graphics for his latest music video AWOOF with Bitbuillz included, a world-first we believe for an NFT metaverse to be featured in a music video, which has already had over a million views. I can’t say too much about it right now, but we plan to do more with Claydee, and other artists, so watch this space. 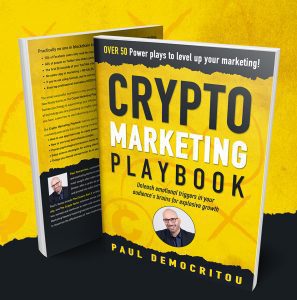 What are cryptocurrencies? Is there an easy way to describe them, and why were they built?

Cryptocurrencies are digital assets that use peer-to-peer networks without a central server to enable decentralized finance. The networked computers maintain a secure, tamperproof ledger of transactions called a blockchain. The first cryptocurrency using this blockchain system was Bitcoin. Satoshi Nakamoto, Bitcoin’s pseudonymous creator, stated the purpose was to bypass “trusted third parties” and financial institutions to avoid reversible transactions and double-spending.

At its simplest, a cryptocurrency is a unit of exchange, and the blockchain is a list of transactions between equals.

What was the need for cryptocurrencies to be created?

Cryptocurrencies were an idea whose time had come. There were a lot of people working on digital currencies. Satoshi Nakamoto’s stated aim was to replace the need for trusted third parties and make trustless transactions possible without double-spending or reversals.

What other use cases do cryptocurrencies have other than paying for stuff?

There are many use cases for cryptocurrencies or blockchain technology. Ethereum, for example, is used to create and track Smart contracts that can be automatically executed when predetermined conditions are met. That’s a bit like a vending machine, where the machine is stocked with a contract, and the goods pop out when you put your money in. There are projects using blockchain to track identities, raw materials and goods from source to end product. And now we have NFT, which are unique items on the blockchain instead of each asset being identical and interchangeable.

How exactly does a cryptocurrency work

It’s magic 😉 Okay, seriously, a lot of computers all work on complex math problems to provide a reliable ledger, so that if one computer leaves and comes back later, they can pick up the longest record and trust that is the true record.

What is the blockchain?

The blockchain is the record agreed on by all computers in the network as the official record of transactions.

What are crypto, coins, tokens, mining, DAOs and NFTs

How do you make a cryptocurrency and who can make one?

Technically, anyone can start a cryptocurrency either by writing the code from scratch or using existing online models. There are even point and click websites where you can start a token project in an afternoon. But in practice, most of these coins have no use case or reason to exist and without a strong group of interested developers, they won’t go anywhere or gain any value.

Is it true that crypto does not have an owner?

Some crypto projects, such as DAOs, aim to have decentralized ownership and to be democratic in development. However, the coins or tokens generated are held and therefore owned by individuals or cooperatives mining in the network. The only true decentralized cryptocurrency with no ownership except the person holding it is bitcoin.

How do you calculate the value of a cryptocurrency?

Why does a cryptocurrency’s price fluctuate?

What advantages does Bitcoin have?

There’s an element of personal control over your Bitcoin assets that is missing in traditional currencies. There’s better privacy and freedom, although that comes with responsibilities. No one can take your Bitcoin away from you or freeze your Bitcoin account unless you are sloppy with your security. Also, where traditional currency is subject to inflation and loses value, Bitcoin is more like digital gold, a spendable store of value. Or sound money and could be the evolvement of money itself.

Why are there so many digital currencies?

We’re still in the early days of digital currencies and there’s an element of the Wild West going on with a lot of prospecting and opportunistic development. Over time, expect the number of coins in existence to diminish.

Can a cryptocurrency fail and not be worth anything?

Thousands already have and thousands more will before things settle down. That’s why you need to do your research and understand what you are buying. Watch The Crypto Factor podcast.

Is it true that cryptocurrencies are used for illegal purposes?

Well Is it true that cash is used for illegal purposes?

Is it legal to buy cryptocurrencies and how many people think it’s illegal?

It is legal in most countries.

How would you buy cryptocurrencies in Greece?

As in any other country, you go to an exchange and buy from there or buy them peer-to-peer from someone with a crypto wallet.

How volatile are cryptocurrencies? Is it some kind of gambling?

There’s no getting away from it; the prices of cryptocurrencies are volatile. If you don’t know what you are doing, and don’t do your research and technical analysis, then yes, you’re gambling. But that is also true on the stock exchange

What are crypto wallets?

What are Bitcoin ATMs and what can you do with them?

Bitcoin ATMs look like cash ATMs. You can put cash in and buy Bitcoins or sell your Bitcoins to withdraw cash from them.

Can your cryptocurrency get hacked and what happens if you do?

People get hacked all the time, and because of the blockchain’s non-reversible nature, you have no recourse to claim your crypto back if you are hacked. People get sloppy with security and are phished while clicking links, and get hacked. That’s why it’s better to store your crypto in a hard or cold wallet. However, as a new crypto investor, you might be better off keeping your crypto on an exchange because exchanges have insurance and may reimburse you if you are hacked. But long-term you want to go off-exchange, because exchanges have been hacked in the past.

Is it true that if you lose your private keys you have lost your money.

What happens if you lose your crypto wallet?

You can restore it with your private keys. So can anyone else so don’t share them… Ever!

Is it true most banks, countries and organizations are investing in cryptocurrency?

It’s true more and more banks are jumping on the bandwagon. Some are using cryptocurrencies to make transfers. Organizations are doing the same. Some countries are treating it as legal tender, such as El Salvador. El Salvador even airdropped 30 dollars of Bitcoin to all their citizens. There are countries creating their own cryptocurrencies.

Have central digital currencies from banks been issued?

The Eastern Caribbean Central Bank issued DCash, which several island nations have adopted. Recently, China has issued its own, and several other countries are working on it. However, these are not decentralized cryptocurrencies. The governments will have complete control, even more than cash, which is dangerous because they can click a button and turn off your access to cash at will, and you have no comeback.

Why would someone invest in crypto right now?

I am not a financial advisor and this is not financial advice. For many people, it’s their best and possibly only opportunity to make serious money in their life.That said, never invest more than you can afford to lose, as with any other speculative investment. Also, the learning curve and learning about them can be invaluable because you are setting yourself up for the future.

Are there any Greek cryptocurrencies?

There’s BitBullz NFTs and Hellas Coin which has recently rebranded to HNC coin.

What is HNC coin?

From what I know, the key person in Hellas coin left. One of the key investors took over the project and rebranded the project into HNC coin.

How do you see the market in the next few years?

The way I see it, if you look at the last 10 years, Bitcoin has been going up. It has dipped a few times along the way, but the overall trend is up. I don’t see this changing for a while, as adoption increases and it becomes more mainstream. There will be dips along the way, but long-term the price will increase dramatically in my personal opinion.

There are two main strands here. Cryptocurrencies with coins of tokens that are interchangeable, like Bitcoin, and NFTs that are unique and will take off in a big way in gaming, collectibles and the art world.